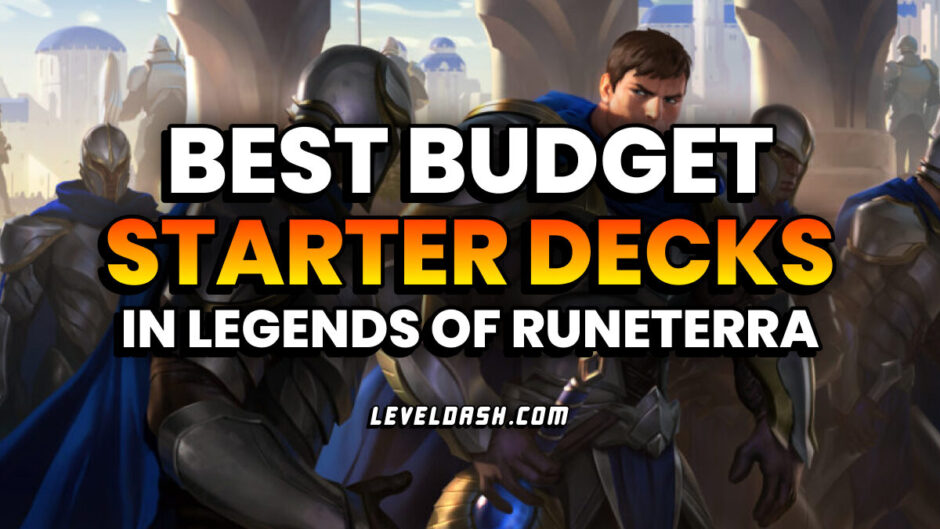 If you’re a new Legends of Runeterra player and are looking for some cheap, easy-to-use but powerful starter decks that can compete with the current meta, you’re in the right place!

In this guide, we’ll introduce you to three budget starter decks perfect for beginners. We’ll also teach you tips & tricks on how to use these decks properly, so you can dominate games and climb the ranks without spending too much on cards.

Here are three starter decks we recommend for new players of Legends of Runeterra:

We assure you these decks are very beginner friendly in terms of playstyle and card acquisition. (Related Guide: 5+ Tips to Get Cards Fast) You won’t need to farm a lot of Wildcards and Shards to build these decks, so you can start grinding your way to Masters rank right away!

Now let’s discuss each starter deck in detail and how to play them effectively.

(If you don’t know how to import decks, we made a quick guide here.)

The Burn Aggro deck is one of the best starter decks for new players looking to climb the ladder, or farm for EXP and cards.

The goal of a Burn Aggro deck is to deal direct damage to the enemy Nexus and end the game as soon as possible. Burn Aggro decks are very fast, and matches usually end at rounds 5-6,which makes it ideal for grinding.

This Burn Aggro deck features cards from the PnZ (Piltover & Zaun) and Noxus regions, and the best part is it doesn’t require any champions, which makes it very cheap and beginner-friendly. This budget version is even used in higher ranks, in fact it has faired well in competitive matches.

How to Play Burn Aggro Deck

Burn Aggro decks are pretty straightforward to play, just swarm the board, keep dealing damage to the face, and close the round with spells such as Get Excited and Decimate.

You’ll want to mulligan for 1- and 2-cost cards, especially Legion Saboteur, Legion Rearguard and Boomcrew Rookie. You’ll want to have them attack the enemy Nexus right away and as many times as possible.

In the early rounds, don’t use your cheap units to block, especially those with Attack effects such as Boomcrew and Legion Saboteur.

Don’t be afraid to receive some Nexus damage, as the game will most likely be over before they can even take you down to zero. Instead, use Used Cask Saleseman’s 0/1 casks to block off incoming damage. You’ll want to play him during your defensive turns.

Reserve your “deal 1 to ally” effects (such as Imperial Demolitionist or Transfusion) and try to only use them on Crimson Disciple to deal more damage to the enemy Nexus.

Use Noxian Fervor to deny enemies from removal spells such as Grasp of the Undying. Or, use them on your blocker units if they’re going to die anyway.

Finally, don’t use your spells as removals such as Mystic Shot. Only use them to deal damage to Nexus directly.

The Demacian Bannerman deck has stood the test of time—it has been one of the most consistently powerful decks even before the Rising Tides update.

This is a classic midrange deck that focuses on board control and making efficient trades with your opponent.

It’s also pretty cheap to build as it only has 1 champion, Garen, which is included in the starter packs.

How to play Midrange Bannermen Deck

Demacian Bannermen decks are all about creatures. Dominate the board by playing units, buffing them with increased stats, and keeping your board wide and healthy by making efficient trades.

Once you have an established board in the mid-game, you’ll then unleash units such as Vanguard Bannerman or Cithria the Bold to further buff all of your battling allies and finish off your entire enemy board, if not the game!

Effects such as Challenger and Barriers which are prevalent in this deck will help you make 2-for-1 trades.

Try to mulligan for Fleetfeather Tracker and pair it with Brightsteel Protector for a Challenger + Barrier combo on early turns.

Use your burst spells to catch enemy blockers off-guard. Spells such as Riposte and Single Combat will allow you to make favorable trades and immediately take down enemy threats such as champions.

Finally, Garen, the only champion in this deck, is a dangerous threat to your opponent. With Regeneration, he is very difficult to remove and when leveled up, he allows your units to Rally, giving you an extra Attack Token in the round.

Finally, here’s a budget control deck for those who want “slow burn” matches.

The Endure Spiders plays around disposable units, usually with the Last Breath effect. In the late game, your win condition is to summon a super-buffed They Who Endure, whose stats are increased based on how many allies have died.

This deck only requires one champion, Elise, which you can also get for free from the starter packs.

How to Play They Who Endure + Spiders Deck

Just like most control decks, the Endure Spiders relies on lots of answers and removals against the opponent. Withering Wail and Vile Feasts will help you survive against Aggro decks in the early game.

The deck synergizes around the Last Breath effect, and has cards that benefit from allied unit deaths. Neverglade Collector for example, drains 1 health from the enemy Nexus when an ally dies. This is especially effective when you swarm the board with cheap spider units.

Use Brood Awakening as blockers to stall the game and keep your Nexus healthy. Blighted Caretaker lets you summon Saplings with Challenger, great for making high-value trades.

Also, try to use Fast Spells only reactively. For example, Glimpse Beyond is a great counter when enemies use removal on your units.

If you have the budget, you can toss in Vengeance as a counter to huge threats, or The Ruination to instantly wipe out full-packed boards commonly used against Midrange and other Control decks.

Finally, once you’ve disposed of several units and They Who Endure is beefy enough, it’s time to play it on the board and finish the game with a fatal Overwhelm-ing attack or two. If that doesn’t suffice, you can use Atrocity to hit them on the face with TWE’s monstrous damage.

These three budget decks are perfect for new players who want to start grinding for cards and XP, or climb the ladder right away without too much investment.

If you have any questions or suggestions, drop them in the comments below!