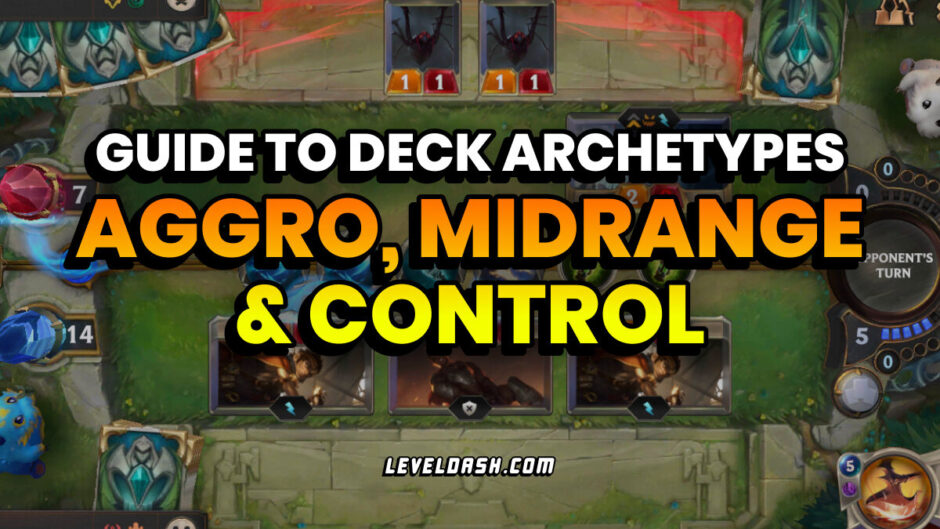 Learning the different types of decks in Legends of Runeterra is an essential skill to improve your gameplay.

In this guide we’ll look at the three main deck archetypes—Aggro, Midrange, and Control—how to play them and what their strengths and weaknesses are.

Deck Archetypes in Legends of Runeterra

There are three main deck archetypes not only in Legends of Runeterra, but in most card games in general, such as Hearthstone or Magic The Gathering:

Now, let’s discuss each archetype in detail and understand why this is the case.

What is an Aggro Deck?

Aggro decks try to win the game as early as possible by dealing direct damage to the enemy Nexus.

How to Play Aggro Decks in Legends of Runeterra

They have a very aggressive playstyle where they try to pressure the board with low-cost units. “Aggro Burn” decks also spam spells that deal direct damage to the Nexus as opposed to taking down enemy units.

Spells like Decimate and Mystic Shot all contribute to burning down the enemy’s Nexus health to zero quickly.

Aggro decks don’t mind taking damage early on, so try to use units only for attacking, especially those with Attack effects such as Legion Saboteur and Boomcrew Rookie (their “Attack” effects don’t work when Blocking).

Also, damage spells such as Mystic Shot are better off used on the enemy Nexus as opposed to killing enemies. You’ll learn this as you play more games and realize that 2 damage can be the difference between winning and losing!

This deck archetype is super easy and fun to play, not to mention it can be built very cheaply! It’s great for beginners who want to play matches as fast as possible and earn EXP fast.

Aggro decks are strong against slow-paced late-game Control decks. Control decks will simply get overwhelmed during the early game and may not even reach the late game which is where they usually achieve their win conditions.

That said, Aggro archetypes are weak against Midrange because Midrange decks have a good early- to mid-game board. Midrange decks also have low-cost units that can efficiently trade and block your aggressive swarm of units.

Midrange decks usually have effects such as Barriers, Challengers, or increased stats. This will make it hard for you to infiltrate their board and deal direct damage to the Nexus.

What is a Midrange Deck?

How to Play Midrange Decks in Legends of Runeterra

Midrange decks sit somewhere in between Aggros and Controls in terms of speed and playstyle.

Demacia Region cards and Bannermen decks are great examples for this archetype. Effects such as Barrier, Tough, and stats-increasing buffs will allow your units to live longer so you can maintain a strong & wide board throughout the match. Your units will usually do 2-for-1 trades (i.e. 1 unit kills 2 enemy units).

When playing Midrange, you’ll want to reserve resources for making trades. For example, spells like Mystic Shot should be used on enemy minions, not on their Nexus. Remember, your main goal is board control until your opponent runs out of steam.

In the late game, you can then unleash champions such as Garen to overwhelm your opponent and finish off the game.

Midrange decks are strong against Aggros because you can efficiently take down their cheap units before they can even lay their hands on your Nexus.

Slower-paced Control decks may out-control you though. Midranges might not be fast enough to end the game early, and so if you end up dragging the game to the later turns, the Control deck will start pulling off their win conditions by that time.

What is a Control Deck?

Control decks are the opposite of Aggro decks—they play for the long game and try to keep the match as slow as possible. Control decks will counter every move their opponent makes using spells such as Deny or Will of Ionia.

How to Play Control Decks in Legends of Runeterra

The goal of Control decks is to stall the game and do everything you can to stop the enemy from being able to do anything. Then, once you think it’s safe, you can start playing your win conditions.

Control decks have win conditions that involve building leveled-up Champions or a one-turn-kill at around turns 9–10 where their opponent will have nothing to defend against. High-damage units with Overwhelm such as Tryndamere come to mind. Heimerdinger is another example of a powerful late game Champion.

It’ll be so annoying if you play against a Control-type build, because for almost every trick up your sleeve, Control decks will have an answer against. Just when you thought you’ve established a powerful board, they’ll just wipe it with a single AoE spell like The Ruination. Before you know it, you’ll run out of cards both on your board and hand, and then it’s their turn to strike.

That said, Control decks are more challenging to use and will require a lot of experience and game knowledge to be used effectively.

Since Control builds like to play it slow, Aggro decks can punish them fast in the early game. Do your best to keep your Nexus healthy in the early-mid game. Every single point of blocked damage counts.

Midrange decks however tend to be weaker against Control decks.

Which deck archetype you want to use depends on the playstyle you want.

If you want quick matches, go for Aggro decks and crush your enemy’s Nexus ASAP.

Do you want to annoy your enemies and stall the game until you deliver your final blow? Control decks may be for you.

And if you want something neither too fast nor too slow but just balanced enough to be able to adjust to any situation, then go for a Midrange type deck.

We recommend the following pages for more examples on which decks you can use:

Which deck archetypes do you love to use and why? Comment down your thoughts below!