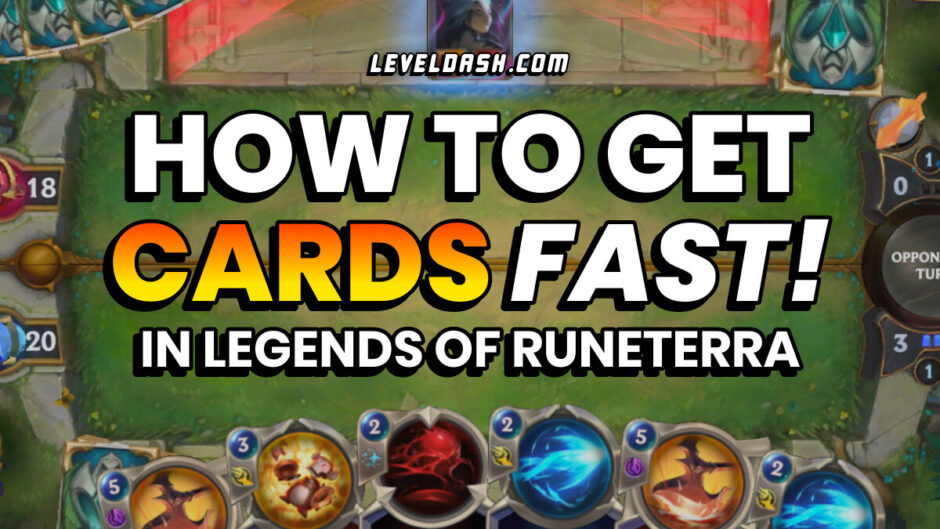 There’s lots of easy ways to obtain cards so you can start building your dream decks right away without even spending a single cent.

In this guide we’ll share some tips on how to efficiently obtain cards fast in Runeterra.

How to Get Cards in Legends of Runeterra

There are currently three ways to obtain cards in Legends of Runeterra:

The costs for each currency increases based on the card’s rarity.

(Related Guide: What are Wildcards and How to Use Them)

Now, here are some tips on how to obtain cards, Wildcards, and Shards in Legends of Runeterra.

Level Up your Regions

In Legends of Runeterra, playing games will earn you EXP which contribute to leveling up your selected Region.

You can choose which among the several Regions you want to level up at a time by going to the Rewards tab and tap “Change Region.”

Every time you level up a Region, you get different rewards such as cards, Capsules and Chests which contain Wildcards and Shards.

However, every 4 levels of each Region yields some great rewards. Level 4 for instance gives you lots of Wildcards, while Level 8 gives you a Champion.

So, it’s a good idea to level each Region to Level 4, then 8, then 12, etc, instead of leveling just one Region all the way through.

Also, card rewards obtained from leveling up your Region will be cards that belong to that Region. So later on, you can try to level up a certain Region that your desired deck is based on.

Every Tuesday, you can claim rewards from your Weekly Vault.

You can level up your Weekly Vault and the contents on the vault depends on how much you’ve leveled it up for that week.

How do you level up the vault? Well, in addition to your Region level, the EXP you earn from playing games and clearing quests will also go to your Weekly Vault’s level.

At higher Weekly Vault levels, you’ll get Wildcards, Champion cards, and an Expedition Token (more on this below!).

You can reach up to Weekly Vault Lv 13. After that, you’ll earn additional capsules every 4,500 EXP.

You’ll need lots of EXP to level up your Region and Weekly Vault. You can earn EXP by just playing games, even AI matches.

But another method is by clearing Daily Quests, which can give you huge bursts of EXP just by doing several tasks.

You may re-roll Daily Quests up to 2 times. Some quests require you to play decks/cards from certain Regions. So try rolling for quests that fit with your current deck. Having multiple decks from different Regions will also help.

Finally, try to aim for quests that give higher amounts of EXP!

You now know how important earning lots of EXP is and how you can earn it from playing games and doing daily quests.

But here are even more tips on how to earn EXP fast:

Another great way to obtain cards is through Expeditions—the “draft” mode of Legends of Runeterra, similar to “Arena” from  Hearthstone.

In this game mode, you draft a new deck from a series of cards and play against opponents. If you lose twice in a row or get 7 wins, the Expedition is over.

You are guaranteed at least an Epic Capsule after a run. It contains at least 1 Epic Card, 2 Commons and 2 Rares. You’ll get more Wildcard rewards and Shards the more wins you get.

Quick tips for playing Expeditions: picking the same archetypes increases the chance of getting that same archetype. This allows you to build a good synergy around your deck. Also, we recommend going for Demacia or Noxus regions as they seem to be the stronger regions at the moment.

Finally, focus on getting cards that have great value in terms of stats and effects. Don’t try to force a combo or synergy deck as that’s virtually impossible to build!

Finally, the last method is the pay-to-win route which is buying cards using Coins—the premium currency which can be bought with cash.

The developers of Legends of Runeterra are actually very generous in terms of letting us acquire cards.

With Coins, you can purchase any of the different Wildcard types. Which means you can actually craft your desired set of cards specifically. No more random card packs and hoping it contains one of the cards you’re hoping to get!

What happens if we get a fourth copy of a card?

Here’s a bonus tip. Since we can only own three copies of a card, what happens then if we happen to get a fourth one?

Well, Riot has officially explained this:

“Legends of Runeterra has systems in place to make sure you don’t gain unnecessary extra copies of any card. Since each deck can only have three copies of a card, you’ll never open a fourth.

We hope this guide has helped you learn how to obtain more cards fast in Runeterra.

If you liked this article, please consider sharing it to your friends!