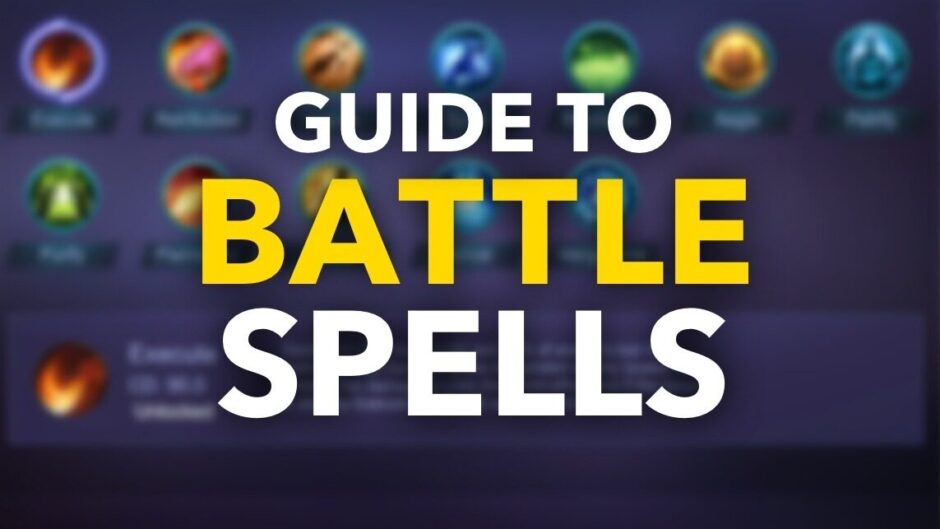 In this guide, we list down all the Battle Spells in Mobile Legends and teach you how to use them effectively.

You can only choose one Battle Spell in each game, so knowing which one to pick and how to use them correctly is very crucial. Read on to learn how!

What are Battle Spells in Mobile Legends?

Battle Spells are active skills in Mobile Legends: Bang Bang that give your hero an additional ability.

There are a total of twelve (12) Battle Spells which can have offensive, defensive, or supportive effects that can either help you secure a kill, survive longer, or execute a strategic maneuver. 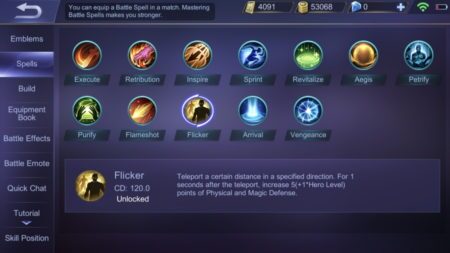 Players choose one Battle Spell that they can use throughout a match.

Complete List of all Battle Spells in Mobile Legends

Now, here’s a list of all Battle Spells that you can choose in the game and some tips on how to use them properly.

Cooldown: 90
Unlocked: Lv. 1
Effect: Deals 220 − 500 (based on level) plus 10% of target missing HP True Damage to an enemy hero. This damage ignores shield. If Execute kills the target, its cooldown is reduced by 40%.

Execute is usually used by heroes with high burst damage such as Assassins or Fighters. It is perfect for taking down single targets as quick as possible. Use it as a finisher or to burst down squishy enemy heroes.

Quick tip: You can hold down the Execute spell button to select a target.

The Retribution battle spell is perfect for heroes who need to farm items fast and spend a lot of time in the jungle. Carry heroes such as Marksmen and Fighters are a good fit for this spell.

To make the most out of this spell, make sure it is always on cooldown. Keep an eye on the spell icon as it has a short cooldown of only 35 seconds.

Pair it up with a Jungling Equipment to gain the passive damage reduction bonus against jungle monsters.

Cooldown: 60
Unlocked: Lv. 5
Effect: Enhances the Hero for 5 seconds. Next 8 basic attacks will ignore 9-23 (based on level) of target’s Physical Defense. Also increases attack speed by 55% for the duration.

The Inspire battle spell is great for Marksmen or Fighter heroes who have huge amounts of physical attack damage.

You should use it to burst down enemy heroes during a teamfight, to push towers, or even when taking down the Turtle/Lord.

When used in the perfect timing, the Inspire spell can turn situations into your favor in an instant.

Sprint is overall a great utility battle spell for almost any role. Use it for chasing, escaping, or to catch up with your teammates and join a teamfight.

You can go for Sprint instead of Flicker if you want a mobility spell that lets you position accurately, or if you want the longer movement speed duration.

Cooldown: 100
Unlocked: Lv. 9
Effect: Summons a Healing Spring where allies within the area of effect restore 2.8% of their Max HP every 0.5s, and enhance the Shield and HP Regen Effect they receive by 40%. Lasts 5 seconds.

The Revitalize spell is perfect for healers and support role heroes.

To maximize its effects, try your best to heal as many allies as possible instead of just healing one or two heroes. This is crucial especially because it has a very long cooldown of 100 seconds.

You can use Revitalize to save dying allies or to increase your team’s survivability during a team fight.

The Aegis gives you and a nearby allied Hero a temporary shield. You can use it when you’re about to jump into a teamfight, or as a last resort to survive and escape from an enemy hero.

Tanks, Fighters and heroes who need to be deep inside a clash (like Claude) can benefit greatly from this battle spell.

The Petrify battle spell gives you a quick disable stun, which is great for crowd control (CC).

Use it on enemy heroes who have channeling skills such as Pharsa to interrupt their spells. You can also use it to shut down high-DPS but squishy enemies like Marksmen or Assassins who are hard to kill or have lots of escape.

The Purify spell is another great defensive spell that can save you out of sticky situations. Pick this battle spell if you’re facing enemies with lots of hard disables, stuns and CCs. (Related: What is CC in Mobile Legends?)

You’ll need good reflexes to use this skill effectively. Like Aegis, it’s great for heroes who need to jump right in to teamfights.

The Flameshot spell is a great offensive spell that can deal a huge amount of damage when used properly.

It’s like a ranged and Magic version of Execute, since it depends on magic power for its damage. Unlike Execute though, it’s a “skill shot” where you target a location instead of a hero, and it doesn’t lock on to a target unit.

You can use it on Mages, or if you have skill procs such as Eudora’s passive, or items like Glowing Wand and Lightning Truncheon.

Cooldown: 120
Unlocked: Lv. 19
Effect: Teleport the Hero for a certain distance to specified direction. After teleport, increases Physical and Magical Defense by 6 – 20 (based on level) for 1 second.

Flicker is one of the best and most popular battle spells in Mobile Legends. Use it as an additional mobility tool to teleport and blink away to a short distance.

There’s lots of uses for this spell, whether you want to initiate a teamfight, or you need to quickly position strategically to cast a skill, or you want to escape from a dire situation.

Almost anyone can pick up this spell, but heroes with no mobility skills benefit the most from it

Flicker can be a game changer or a life saver, and a perfectly-timed and well-positioned blink can spell victory for your team.

Cooldown: 120
Unlocked: Lv. 21
Effect: After channeling for 2.5 seconds, teleport the Hero to target allied turret or minion. Target turret or minion is invincible while channeling. After teleport, increases movement by 30% for 3 seconds. If Arrival is interrupted while being channeled, its cooldown is reduced by 50 seconds.

Arrival isn’t a very popular choice, though it has some great advantages.

It can make a target turret invulnerable for a few seconds, so you can use it to protect an unguarded tower from being taken down.

You can also use it to quickly join team fights from a long distance.

Another spell that isn’t used often but it’s great for Tanks and other durable heroes that take a lot of damage.

Use it when initiating a teamfight or when being targeted by lots of enemies and watch their HP bars drop quickly by their own attacks.

Since it deals damage each time you receive an attack, it’s great against enemy heroes with fast attack speed such as Marksmen.

Hopefully this guide has helped you to learn and decide which Battle Spells you should use for different hero roles and situations in Mobile Legends: Bang Bang.

Comment down below which battle spell is your favorite and why!