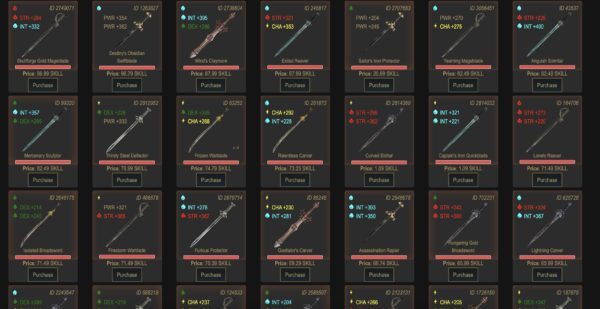 CryptoBlades is a NFT role-playing game where players recruit a team of knights and equip them with weapons to fight off enemies.

To increase your SKILL rewards and improve your chances of winning, you need to invest on a powerful weapon with an optimized set of stat attributes.

Here’s a quick guide and some tips on how to choose the best weapon for your CryptoBlades team.

How to obtain weapons in CryptoBlades

To obtain weapons in CryptoBlades, you can either forge them at the Blacksmith by spending SKILL, or purchase them from other players at the Marketplace.

When you forge a weapon, the chances of getting each weapon rarity are as follows:

When buying weapons at the marketplace, you can use the filter functions to easily search for specific stats and attributes for your desired weapon.

What attributes does a weapon have in CryptoBlades?

In CryptoBlades, weapons have the following properties:

All these weapon attributes can affect either your chances of winning in combat or your SKILL reward earnings.

Does a better weapon give me more SKILL earnings?

In CryptoBlades, using stronger weapons will give you more SKILL earnings.

Investing on weapons with better stat attributes will give you more overall power.

As a result, the game will give you enemies with higher power too, which means you will also get higher SKILL rewards.

Equipping your characters with better weapons with the proper elements will also increase your chances of winning in combat.

A higher winrate will mean an increase in your overall earnings over time.

Here are some tips on how to get the best weapons for your CryptoBlades team.

How to Choose the Best Weapon in CryptoBlades

As with most RPG fighting games, there is no single best weapon to rule them all.

However, here are some tips on choosing the best weapons for your team in CryptoBlades.

1. Weapon element should be the same as your character

In CryptoBlades, there are four elements and each has its own strengths and weaknesses.

Characters, weapons, and weapon attribtues can possess one of these four elements.

If you equip a weapon that has the same element as the character using it, you will gain 7.5% bonus power.

This is why a good strategy is to have only one element for all 4 characters in your team and invest on one powerful sword of the same element as your team.

2. Weapon stats should be as maxed out as possible

Weapon stat attribute points is one of the biggest contributor to the overall power and value of a weapon.

This is the second most important thing to look out for when choosing weapons.

The higher the total attribute points of a weapon, the more earnings you get on average.

Note that having more stats doesn’t affect your odds in battle, but it does increase your earnings.

This is because if you use weapons with higher stats, the game will also give you stronger enemies, which in turn gives more rewards.

A common newbie mistake is to prioritize expensive weapons with pure elements and higher rarity, when in fact, you can get more value out of your investment even with a low-star weapon as long as it has decent stats.

This is especially useful if you are a new player who only invested a small amount into the game and want to get the most bang out of your buck. 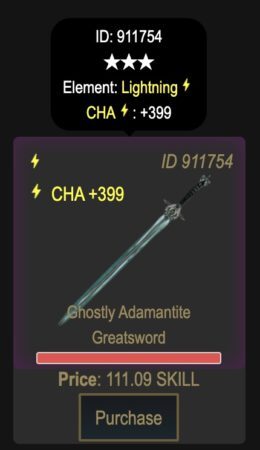 So, how do you know if a weapon has good stats?

Simple: each weapon rarity has a minimum and maximum amount of stat points.

This means you should go for weapons with stat points that are nearer to its ceiling value.

4 star and 5 star weapons on the other hand will have 2 and 3 stat attributes, respectively. Similarly, aim for stats that are above the average amount. For example, a 4 star weapon with both stats above ~350.

3. Weapon attribute elements should align with the weapon element

Another property that makes your weapon more powerful is element alignment. This is when all the stat attributes have the same element as the weapon element.

Unlike the number of points in your weapon’s stat attributes, element alignment DOES increase your winrate in combat. 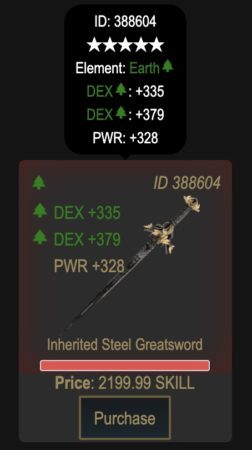 In addition to the 7.5% bonus power if your character and weapon elements are aligned, you also get 7.5% bonus damage if the enemy is weak against the character’s element.

This will give you a total of 15% additional damage modifier.

Another way to increase a weapon’s overall power is to reforge it in the Blacksmith.

Reforging is the process of upgrading a weapon by using another weapon as fodder (also called the burn weapon) and consuming a small amount of SKILL.

When you reforge a weapon, it will receive additional Bonus Power based on the rarity of the burn weapon used.

Reforged weapons are indicated by their LB, 4B or 5B attributes and an additional Bonus power stat.

Check out our comprehensive guide on reforging weapons here!

Getting the best weapon and choosing the right elements for your characters will give you a huge boost in power and SKILL earnings.

These tips will help players, especially beginners, to make sure that you are getting the most value out of your investment by choosing the correct weapons for your team.