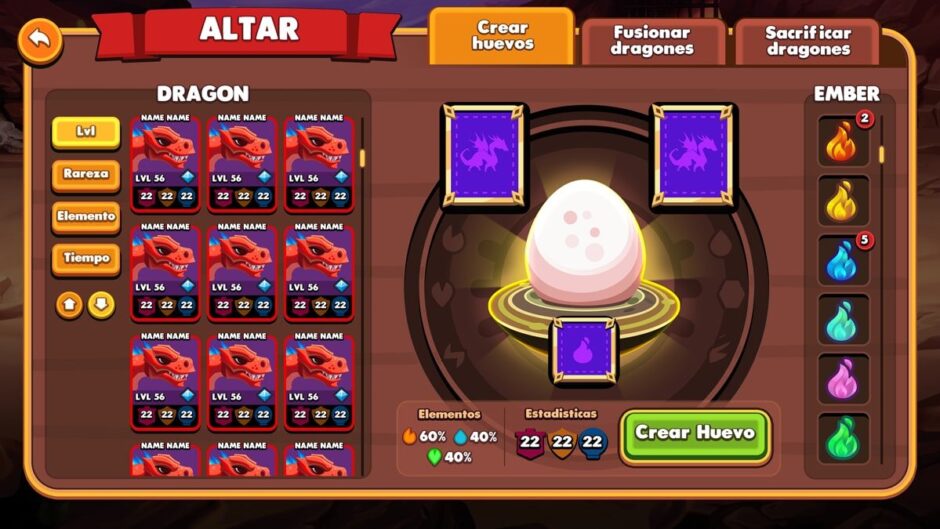 Dragonary is a play-to-earn game where players breed, raise, and battle Dragons to earn in-game resources and Coinary Tokens (CYT).

The best part about this game is anyone can start playing right away for free—all players get a starter team of 3 Common Dragons.

If you want to progress faster and earn more in Dragonary, you should obtain more Dragons with higher rarity by breeding them.

If you want to increase the in-game rewards you get each day, you’ll need to increase your account’s rarity level by holding more Dragons with higher rarity. Check out our full guide on how much you can earn here.

You can do this by breeding and fusing Dragons together to get new Eggs. Depending on several factors, these new Dragon offspring can have a higher rarity than its parents.

Breeding vs. Fusion of Dragons in Dragonary

In Dragonary, there are two ways to breed Dragons: creating eggs or fusing rare dragons.

You can breed two Common or Uncommon Dragons to create new eggs.

For Rare, Epic and Legendary Dragons, you can fuse five (5) of them together and obtain a new egg.

The Dragons used as fodder for the fusion will be sacrificed and will disappear forever, but you will get a new one with a higher rarity and superior base stats.

Dragon Fusion will maintain a deflationary economy in the game and prevent an oversupply of Dragons which can result in lower market prices.

How to Create Eggs by Breeding Dragons in Dragonary

Here is a step-by-step guide on how to breed Common or Uncommon Dragons to obtain new Eggs.

1. Level up your Dragons to 50% of their max level

The first requirement to breed Common and Uncommon Dragons is to level them up to become Adults.

A Dragon matures into an Adult when it reaches 50% of its max level:

You can level up your Dragons by going on PVE missions such as Story Missions, or Ember Quests to gain Embers and Obsidian.

(Related Guide: How to Start Playing Dragonary for Free)

2. Collect Sparks and Forge them into Embers

To breed Common and Uncommon Dragons, an Ember is also required.

Embers can be obtained by fusing five (5) Sparks of the same element.

Sparks can be farmed by doing any of the seven Ember Quests, each one with a different element.

The Ember used in breeding determines the element of your Dragon, so make sure to farm the right element if you have a desired element for your new Dragon.

Once you’ve collected at least five Sparks of the same element, you can fuse them together by going to Cave > Forge.

Just drag the Sparks into the fuse slot and click “Fuse.”

Breeding Common and Uncommon Dragons in Dragonary requires you to spend a small amount of Coinary Tokens (CYT).

The amount of CYT required depends on the Dragon’s rarity and how many times they have already been used to breed before.

Check out the next section below for the table of the CYT costs per Dragon rarity and number of eggs bred.

Once you’ve prepared all the materials and costs required to breed your Dragons, just go to Cave then Altar.

Make sure you’re on the Create Eggs tab.

5. Select your Dragons and add the Ember

To select the Dragons you want to breed, just drop them on the two upper slots.

You’ll then see the expected stats of the resulting egg on the bottom.

Remember the elemental Ember you forged earlier? They should show up on the right side of the UI.

You can drag an Ember to the slot on the bottom.

Here are the CYT costs for breeding Common Dragons:

If the resulting Dragon is of a higher rarity (Uncommon), the CYT cost will be multiplied by 1.5.

These are the CYT costs for breeding Uncommon Dragons:

If the resulting Dragon is of a higher rarity (Rare), the CYT cost will be multiplied by 2.

How long does an Egg hatch?

The time it takes for an Egg to incubate and hatch into a Dragon depends on its rarity:

The incubation period only applies to Common, Uncommon and Rare eggs.

In Epic, Legendary and Mythical fusions, the resulting Dragons will be visible immediately. But they will not be available until the growth timeframe is completed.

How to Increase the Rarity of Dragons by Breeding

The total of these three stat points determine a Dragon’s rarity.

To increase the rarity of Common/Uncommon Dragons by breeding, the total of the new Dragon’s stats must reach a certain amount.

For Common Dragons, the total stats must reach 50 or more to raise the rarity to Uncommon. In this case, the CYT cost will increase by 1.5 times.

For Uncommon Dragons, the total stats must reach 90 or more to raise the rarity to Rare. In this case, the CYT cost will increase by 2 times.

Here’s an example. Let’s say you have two common Dragons, Dragon A and Dragon B.

If they breed, the resulting egg is Dragon C and it will have 20% increased stats from the average of Dragon A and B.

If you breed Dragon A and B again to hatch Dragon D, it will also have 20% increased stats (almost same as Dragon C).

Now if you breed Dragon C and Dragon D, it will result in Dragon E which will have 20% increased stats from the average stats of its parents, Dragon C and D.

You can continue this cycle until you breed Dragons where the total of its three stats reach 50 (for Uncommon) or 90 (for Rare).