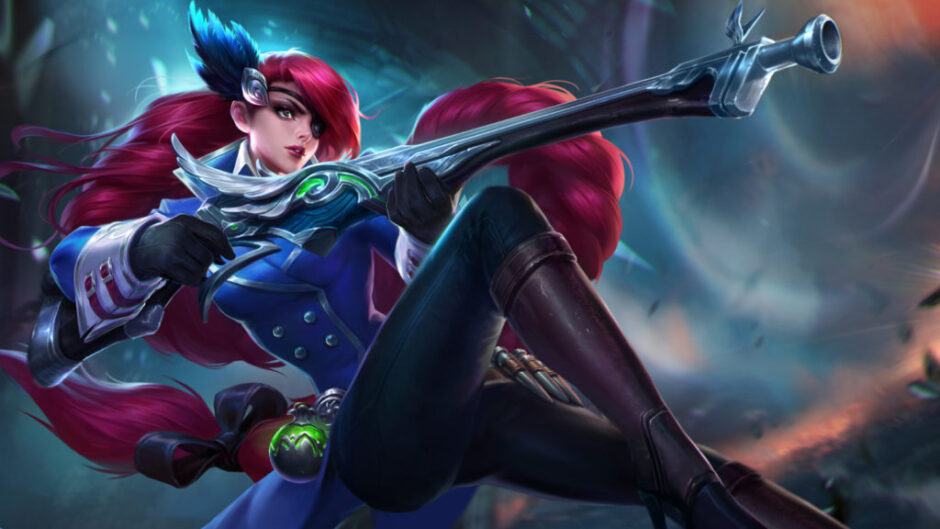 Lesley is one of the deadliest Marksman and Assassin in Mobile Legends: Bang Bang.

When fully-equipped in the late game, she can instantly snipe and take down any enemy from a distance.

This guide will teach you how to use Lesley effectively—which items, emblems and battle spells you should get, as well as some tips & tricks.

As a deadly sniper, Lesley can take down enemies in just a few shots, thanks to her passive skills and abilities that let you deal lots of critical damage.

Aside from that, Lesley is known for her ridiculously long attack range. This is what makes her a very powerful Marksman—she can deal lots of burst damage from a safe distance.

Should I buy Lesley?

Lesley’s playstyle involves a lot of farming in the early game. Then in the late game once she’s geared up, your role is to stay in the backlines and try to snipe enemies from a distance.

If you’re looking to buy a Marksman and want to get lots of MVPs, we highly recommend buying Lesley as one of your heroes.

Here are two item builds you can use for Lesley. You can use whichever fits your playstyle better. Feel free to play and experiment with the builds a bit too.

The first build is meant for “one-shot” kills. You’ll generally fire lesser shots with this build, but each shot is packed with fatal critical damage.

With this build, you’ll want to only fire shots when your passive, Lethal Shoot, is on cooldown. Magic Shoes lowers your cooldowns so you can spam your skills and trigger your passive more frequently.

Again, your role would be:

Endless Battle builds up on your passive skill even more so you get additional damage on your next attack after using a skill.

With the Silver Bullet item build, 2-3 rounds of Lethal Shoot loaded attacks are usually enough to take down an enemy in the late game.

You’ll still start with Berserker’s Fury, but get Swift Boots instead for a faster attack speed.

Scarlet Phantom will be your second power spike. This item gives you insane amounts of attack speed and critical chance.

With this build, you can fight your enemies face to face and tear down their health points as you shower them with rapid critical attacks.

Here are some tips and tricks on how to play Lesley effectively in Mobile Legends:

Lesley enters Camouflage state for 3s, increasing movement speed by 30% and physical attack by 50. Dealing or taking damage will cancel the state. Enemies can detect Lesley’s camouflage through distortions in their surroundings.

Throws a tactical grenade forwards, which explodes in fan-shaped area in front of her. Deals damage and knocks enemies back, while Lesley also jumps back slightly. Using this skill will instantly cancel Ultimate Snipe and release its fatal bullets. (Extra attacks will only be launched if fatal bullets have not finished firing.)

Lesley abandons her senses and captures all enemy movements in an area by her mind. She locks onto an enemy hero and fires 4 deadly bullets, dealing 200(+80% Extra Physical ATK) +5% of the target’s missing HP as Physical Damage. Each bullet that hits a target will restore 10 energy. Bullets can be blocked by other enemy heroes.

Lesley is a very squishy hero. Although she can use her first skill Master of Camouflouge to escape, or her 2nd skill Tactical Grenade to push back enemies, sometimes they are not enough to escape imminent death.

The Flicker battle spell gives Lesley additional mobility to escape teamfights or an enemy chasing you.

For Lesley’s Emblems, we highly recommend the Assassin emblem for the bonus cooldown reduction which helps her spam her skills faster and trigger Lethal Shot.

The Bounty Hunter talent is is also great on her because she needs gold to farm her items fast. Lesley depends on items a lot especially during the early game where she can’t really do much yet.

Hopefully this guide will help you to play Lesley more effectively and push her to her full potential.

Do you like using Lesley in Mobile Legends? What item builds do you use when playing this deadly Sniper assassin?